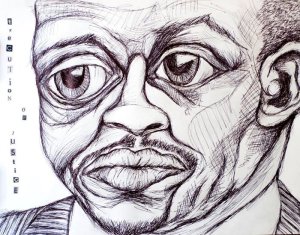 Execution of Justice by Kim Nicolini

With the murder of Troy Anthony Davis by the state of Georgia, the U.S. Supreme Court affirmed a 2009 capital punishment opinion of  conservative associate, Justice Antonin Scalia, in which he ruled: “[T]his court has never held that the Constitution forbids the execution of a convicted defendant who has had a full and fair trial but is later able to convince a habeas court that he is ‘actually’ innocent.”

Still, the ultimate victory for Troy Davis is that he inspired millions of people – around the world and here in the United States – who want to live in a more peaceful and less violent society. In that regard Troy’s life and murder by the government was not in vain. Sometimes it takes a single incident to shake people up.

Bruce Dixon, managing editor@Black Agenda Report: ” It’s great that so many people signed Troy Davis’s petition and made themselves so visible as opponents of the death penalty. But Troy was clearly and obviously innocent, and imprisoned for decades, ultimately executed anyhow. But until we stand up for the rights of ALL the imprisoned, convicted and formerly convicted, including all those whose innocence, however you construe that word, is not so obvious and those who may in fact not even be innocent —- till we stand for their human rights to education, to health care and a decent chance at life by radically shrinking and ultimately ending the institution of prison the machine that convicts the literally innocent will retain legitimacy and roll on, doing what it does. In other words, coming out to oppose the execution of an obvious innocent person like Troy Davis is low hanging fruit. It’s good that so many are wiling to reach for it. But we will rarely be able to save even these till we de-legitimize the institution of prison and chop down the whole rotten tree.”

To hear Kevin Alexander Gray’s interview click on header@top of page.  To contribute time or money to organizations working to abolish the death penalty in the U.S. click on any or all of the provided logos.  Click on Kim Nicolini’s artwork of Troy to link to his website which is being maintained by family and friends.  Or start, help start or join an existing anti-death-penalty group.

National Association for the Advancement of Colored People 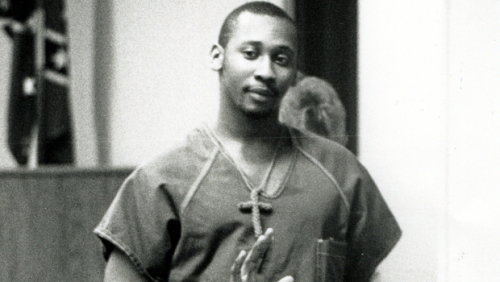 “I’d like to address the MacPhail family. Let you know, despite the situation you are in, I’m not the one who personally killed your son, your father, your brother. I am innocent.

The incident that happened that night is not my fault. I did not have a gun. All I can ask … is that you look deeper into this case so that you really can finally see the truth.

I ask my family and friends to continue to fight this fight and to keep the faith.

For those about to take my life, God have mercy on your souls. And may God bless your souls.”