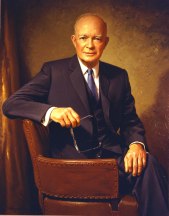 Eisenhower warns the United States of America against the rise of the Military Industrial Complex in his Jan.17,1961 address.

Bringing to the Presidency his prestige as commanding general of the victorious forces in Europe during World War II, Dwight D. Eisenhower obtained a truce in Korea and worked incessantly during his two terms to ease the tensions of the Cold War. He pursued the moderate policies of “Modern Republicanism,” pointing out as he left office, “America is today the strongest, most influential, and most productive nation in the world.”

Three days from now, after half a century in the service of our country, I shall lay down the responsibilities of office as, in traditional and solemn ceremony, the authority of the Presidency is vested in my successor.

This evening I come to you with a message of leave-taking and farewell, and to share a few final thoughts with you, my countrymen. END_OF_DOCUMENT_TOKEN_TO_BE_REPLACED