“I’ve Been to the Mountaintop” | Martin Luther King, Jr. 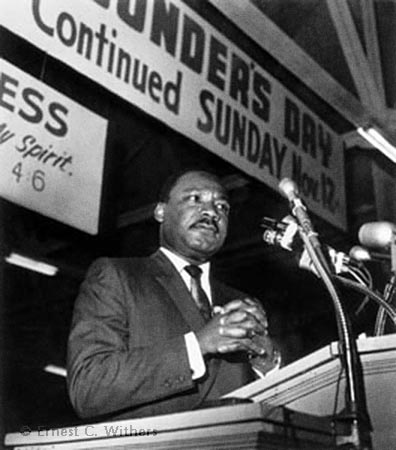 Thank you very kindly, my friends. As I listened to Ralph Abernathy in his eloquent and generous introduction and then thought about myself, I wondered who he was talking about. It’s always good to have your closest friend and associate say something good about you. And Ralph Abernathy is the best friend that I have in the world.

As you know, if I were standing at the beginning of time, with the possibility of picking a general and panoramic view of the whole human history up to now, and the Almighty said to me, “Martin Luther King, which age would you like to live in?” — I would take my mental flight by Egypt through, or rather across the Red Sea, through the wilderness on toward the promised land. And in spite of its magnificence, I wouldn’t stop there. I would move on by Greece, and take my mind to Mount Olympus. And I would see Plato, Aristotle, Socrates, Euripides and Aristophanes assembled around the Parthenon as they discussed the great and eternal issues of reality.

But I wouldn’t stop there. I would come on up even to 1863, and watch a vacillating president by the name of Abraham Lincoln finally come to the conclusion that he had to sign the Emancipation Proclamation.

I would even come up to the early thirties, and see a man grappling with the problems of the bankruptcy of his nation. And come with an eloquent cry that we have nothing to fear but “fear itself.” But I wouldn’t stop there.

Strangely enough, I would turn to the Almighty, and say, “If you allow me to live just a few years in the second half of the 20th century, I will be happy.” END_OF_DOCUMENT_TOKEN_TO_BE_REPLACED

Jesse Jackson and Billy Kyle – the last two people to speak with Martin Luther King Jr. the moment before he was shot tell of the experience. (April 05, 2008)