“It’s like when you go to the dentist, and the man’s going to take your tooth. You’re going to fight him when he starts pulling. So he squirts some stuff in your jaw called novocaine, to make you think they’re not doing anything to you. So you sit there and ’cause you’ve got all of that novocaine in your jaw, you suffer peacefully. Blood running all down your jaw, and you don’t know what’s happening. ’Cause someone has taught you to suffer – peacefully.”

There’s a picture of Barack Obama next to one of Jesus in the front window of the small, black art gallery that I drive past almost every­day. And I still see someone wearing an Obama t-shirt maybe once a week, but sometimes it’s the same guy. If you’re looking, you can a find a variety of shirts in just about every corner store where I live. They’re on the wall, next to the Bob Marley, Tupac, Biggie Smalls and Al Pacino “Scarface” t-shirts. You can get an Obama hat and a presidential calendar there too. There are still a few Obama yard signs in the neighborhood, usually in a window. A few people still have an Obama bumper sticker on their cars. Not as many as some might think. Certainly not as many as the number of Confederate flags on vehicles in this part of the country.

Racial solidarity is the mood that helped get Obama into the White House. The traditional source of power and sur­vival among blacks, it is also the novo­caine of the moment, a numbing agent as people suffer through what, despite the more hopeful official forecasts, feels like a full-blown depression where I live. The pride is real, but so is the pain, and it’s coming in sharp stabs despite the shot. The novocaine is still working, just not so well, and the result is a discomfiting confusion.

In late September I spoke at a ‘‘Black Male Summit” about 80 miles north­west of Columbia in Rock Hill, South Carolina, which is famous in civil rights’ lore as the first stop in the Deep South for the Freedom Riders testing the 1960 Supreme Court decision outlawing ra­cial segregation in all interstate public facilities. Rock Hill is where Student Nonviolent Coordinating Committee (SNCC) activist John Lewis and another man stepped off the bus and were beaten by a white mob. The town is mentioned in Chuck Berry’s “Promised Land” – only the “poor boy” on the Greyhound is lucky as his bus “bypassed Rock Hill” in the song. Things are still tough in the town just south of Charlotte. Since February of 2008 the number of jobs here has fallen by 15 per cent, and the average salary for people lucky enough to be employed is about $28,000. In June of this year, Yvette Williams, a 15 year-old black girl, was shot and killed by two police officers after she robbed a grocery store. The two of­ficers fired on Williams five times after she pointed a gun at them and refused to drop it, according to Rock Hill Police Chief John Gregory. He said he felt the police response was justified. A witness who lives across the street from where the shooting happened, told the local paper she was in bed when she heard shots and got up, looked out her window and saw the girl fall to the ground. She said she then saw an officer shoot again.

The theme I was asked to speak on in Rock Hill was “How do we restore dignity back to black communities?” My initial response was I didn’t know we’d lost it. But I knew the idea was a nod to Obama’s tough-love trick bag. “Post-racialism” is nonsense, but as an ideological concept it’s real, with real political consequences. On the right, it is license for white blow­hards to go on any racist tirade they like so long as they don’t actually broadcast the word “nigger.” In the black communi­ty it’s alive wherever blacks argue among themselves as to whether they are indi­vidually or collectively responsible for the conditions they face, or if they’re as criminal or immoral or lazy or violent or promiscuous or stupid as racists believe them to be. Sherman Porterfield, one of the organizers of the event, was quoted in the local paper, “Obama talked about it,” this claimed loss of dignity; “he has challenged us. The question now is, are we up to the challenge? Our young peo­ple are dropping out of school in record numbers, and it’s our fault. Nobody is shooting water hoses at us anymore. But we are allowing our young brothers to shoot each other. And that is not accept­able.” END_OF_DOCUMENT_TOKEN_TO_BE_REPLACED

Stokely Carmichael, national head of the Student Nonviolent Coordinating Committee [SNCC] speaks from the hood of an automobile on the campus of Florida A&M University, April 16, 1967, in Tallahassee, Florida.  Several hundred students listened as Carmichael spoke of “Black Power” and the Vietnam war.  (AP Photo/stf)

“In Lowndes County, we developed something called the Lowndes County Freedom Organization. It is a political party. The Alabama law says that if you have a Party you must have an emblem. We chose for the emblem a black panther, a beautiful black animal which symbolizes the strength and dignity of black people…Now there is a Party in Alabama called the Alabama Democratic Party. It is all white. It has as its emblem a white rooster and the words “white supremacy – for the right”. Now the gentlemen of the Press, because they’re advertisers, and because most of them are white, and because they’re produced by that white institution, never called the Lowndes County Freedom Organization by its name, but rather they call it the Black Panther Party. Our question is, Why don’t they call the Alabama Democratic Party the “White Cock Party”? It’s fair to us…” (1966)

END_OF_DOCUMENT_TOKEN_TO_BE_REPLACED

Huey Percy Newton  founded the Afro-American Society and was a co-founder of the Black Panther Party, serving as its minister of defense during much of the 1960s. Later he turned to community service for the poor.

The Newton family moved to Oakland, California, in 1945 to take advantage of the job opportunities created by World War II wartime industries. In Oakland the family moved often, and in one house Huey was compelled to sleep in the kitchen. Even though the Newton’s were poor and victims of discrimination and segregation, Huey contends that he never felt deprived as a child and that he never went hungry.

Newton, founded the Black Panther Party for Self Defense in 1966 with Bobby Seale. The organization advocated that Black Americans “bear arms in self-defense” against community repression by police. Among the tactics he employed was the institution of ”justice patrols” by armed Black men whose purpose was to monitor police actions and inform community residents of their rights when confronted by law enforcement.

In 1967 Newton was arrested and charged in the shooting of one policeman and the killing of another. His trial and subsequent conviction focused attention on the issue of police brutality.

Newton was considered a political prisoner. A national movement using the catch phrase ”Free Huey!” rallied people across the nation to the cause of civil rights.

After he served 22 months, his conviction was overturned due to a prosecution error in the trial.

In 1970, he was called to appear before the California State Senate Un-American Activities committee to answer charges that the Black Panther Party was a communist-run organization.

In 1974, Newton spent time as a fugitive in Cuba after being accused in the murder of a 14-year-old prostitute and of pistol-whipping his tailor. He returned to Oakland and faced two trials on the charges, both of which ended in hung juries.

ARREST IN MURDER OF NEWTON

“Revolutionary Nationalism- A good example of revolutionary nationalism was the revolution in Algeria when Ben Bella took over. The French were kicked out but it was a people’s revolution because the people ended up power. The leaders that took over were not interested in the profit motive where they could exploit the people and keep them in a state of slavery. They nationalized the industry and plowed the would be profits into the community. That’s what socialism is all about in a nut The people’s representatives are in office strictly on the leave of the people. The wealth of the country is controlled by people and they are considered when ever modifications in the industries are made.

The Black Panther Party is a revolutionary Nationalist group and we see a major contradiction between capitalism in this country and our interests. We realize that this country became very rich upon slavery and that slavery is capitalism in the extreme. We have two evils to fight, capitalism and racism. We must destroy both racism and capitalism.”

END_OF_DOCUMENT_TOKEN_TO_BE_REPLACED

Molefi Kete Asante | Dubois and Africa: The Convergence of Consciousness 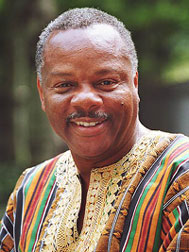 The 30th Annual W.E.B. DuBois Lecture was held Wednesday, November 12, 2008 at UMBC. Molefi Kete Asante, a professor in the Department of African American Studies at Temple University, discusses DuBois and Africa: The Convergence of Consciousness. Asante is an expert on African culture and philosophy and is the author of 65 books and more than 300 articles. The founding editor of the Journal of Black Studies, he is considered to be one of the 10 most widely cited African American writers and scholars.

The event was sponsored by the Department of Africana Studies with additional support from the Dresher Center for the Humanities.