(Note: The following data is compiled from a list of sources included at the end of summary.  Please click links for more detailed information.  Does not include deaths from war or other government/state perpetrators to include “crimes” committed in war zones. Both Staff Sgt. Robert Bales and Major Nidal Hasan are cited in the overview. Doubtless, Hasan is included in current domestic crime statistics, Bales crimes are probably not included in domestic homicide stats.  I also encourage readers to check data presented against other sources.)

According to a 2007 Small Arms Survey by the Geneva-based Graduate Institute of International Studies, about 4.5 million of the 8 million new guns manufactured worldwide each year are purchased in the United States and the nation has about “90 guns for every 100 citizens.”   The US is it the most heavily armed nation in the world with its citizens “owning 270 million of the world’s 875 million known firearms.”

The 2007 report estimated there were 650 million civilian firearms worldwide, and 225 million held by law enforcement and military forces.

Although the AR-15 assault-type weapon – the civilian adaptation of the standard military issue M-16  – is the most popular “sportsman’s weapon” in the US, some estimates are that during the last 60 years well over 100 million Kalashnikov AK–47-style assault rifles – famously referred to as “the people’s gun” – have been put into circulation around the world.

The FBI also estimates that there are 250-270 million registered privately owned firearms in the US – 100 million handguns, 150-170 million shotguns and rifles. Others estimate 350,000,000, as there’s no way to know the number of unregistered, illegal foreign-made weapons in the country.  Add those owned by the military, law enforcement agencies and museums and that’s 1 weapon for every man, woman and child.

There are 129,817 federally licensed firearms dealers, 51,438 of which are retail gun stores. That compares with 10,787 Starbucks stores, and 143,839 gas stations across the country. And that doesn’t count gun shows. About 40 percent of guns are sold in unlicensed private sales.

The majority of guns are owned by whites.

Based upon surveys, the following are estimates of private firearm ownership in the U.S. as of 2010:

A 2005 nationwide Gallup poll of 1,012 adults found the following levels of firearm ownership:

In the same poll, gun owners stated they own firearms for the following reasons:

The most current polls report that among those who own handguns, 75 percent reported in a national survey that self-protection is the primary reason for owning a firearm. A 2000 study published in the Journal of Quantitative Criminology (link is to pdf for 2009 study) reported that US civilians used guns to defend themselves and others from crime at least 989,883 times per year. (Is a Gun an Effective Means of Self-Defense?)

Other cite or argue:

[So You Think You Know the Second Amendment? By Jeffrey Toobin – http://www.newyorker.com/online/blogs/comment/2012/12/jeffrey-toobin-second-amendment.html#ixzz2FSy4HiRc]

The Real And Racist Origins of the Second Amendment By Bruce Dixon – http://blackagendareport.com/content/american-history-black-history-and-right-bear-arms 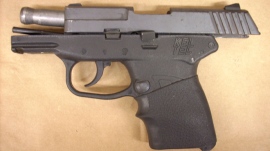 The 9mm has replaced the .38 and the .32 as the weapon of choice of many gun owners and doubtless, guns are used more often than rifles in weapons-related incidents. It’s the most common home protection weapon.

Maj. Nidal Malik Hasan in the Fort Hood shootings in which 11 people were killed in November 2009 used a Herstal 5.7 x 28 semi-automatic handgun that can hold 20 rounds.

Staff Sgt. Robert Bales – charged with the murder of 17 Afghan civilians and the attempted murder of 6 others in Panjwai, Kamdahar, Afghnaistan on March 11, 2012 – used an M4 carbine outfitted with a grenade launcher, a 9 mm pistol and a knife.

Four months later on July 20, 2012,  James Eagan Holmes set off tear gas grenades and fired into the audience of a Aurora, Colorado movie theater killing 12 people and injuring 58 others. He had multiple weapons – a 12 Remington shotgun,  12-gauge Remington 870 Express Tactical , a Smith & Wesson M&P15 – semi-automatic rifle with a 100-round drum magazine, which malfunctioned after reportedly firing fewer than 30 rounds and a Glock 22 handgun.

Modern Firearms – AK-47 in US – http://world.guns.ru/assault/rus/ak-akm-e.html

Most Common Weapons – For homicides in which the weapon used could be identified, 82 percent of black victims (5,065 out of 6,156) were shot and killed with guns. Of these, 74  percent (3,723 victims) were killed with handguns. There were 587 victims killed with knives or other cutting instruments, 238 victims killed by bodily force, and 170 victims  killed by a blunt object.

Victim/Offender Relationship – For homicides in which the victim to offender relationship could be identified, 72 percent of black victims (2,271 out of 3,134) were murdered by  someone they knew. Eight hundred sixty-three victims were killed by strangers.

Most murders are intra-racial-

For homicides committed by –

The Worst Mass Shootings of the Past 50 Years

On December 14, 2012 in Newtown, Connecticut, Adam Lanza, 20, killed 20 children and six others at the Sandy Hook Elementary School as well as his mother, Nancy, at her home prior to the massacre at the school. Lanza committed suicide after the tragedy. The shooting was the second deadliest in U.S. history, behind the 2007 shooting at Virginia Polytechnic Institute that claimed 32 people on April 16, 2007.

Lanza had 3 weapons in his possession, legally obtained by his mother.  He had two handguns, a Glock and a Sig Sauerm and a Bushmaster AR-15 “assault-type weapon” with magazines that held 30 bullets each.

Despite high-profile multiple shootings, youth (in particular those who live in high-crime neighborhoods) are safest while in school. A 2-year study by the Centers for Disease Control and Prevention found that the incidence of school-associated violent death was less than one in a million.

Beyond the American Legislative Exchange Council (ALEC)and its primary funder the National Rifle Association (NRA), a host of groups such as Gun Owners of America, OpenCarry.org, Citizens Committee for the Right to Keep and Bear Arms and various statewide conceal carry groups have gotten to state legislators – Republicans and Democrats – in the past 2 decades.  Extension of the “Castle Doctrine” lies at the foundation of gun carry laws.

Despite a provision in the 1994 Crime Control Act requiring the Attorney General to collect the data and publish an annual report on them, “official” statistics on police shootings or those “acting” as police (security officers, etc.) and use of non-deadly force is hard to come by. At present, no comprehensive accounting for all of the nation’s 17,000 police department exists. The Jericho Project of the October 22nd Coalition tries to keep track of the victims through its ‘Stolen Lives’ publication.   In the 1990s, the Stolen Lives Project estimated that there were over 2,000 deaths at the hands of police and other law enforcement agencies. Police supporters claimed that the numbers were too high. Now it appears that the numbers of people killed by the police in the 1990s was even higher than Stolen Lives Project had estimated.

WOULD BANNING FIREARMS REDUCE MURDER AND SUICIDE?
A REVIEW OF INTERNATIONAL AND SOME DOMESTIC EVIDENCE
DON B. KATES AND GARY MAUSER – Volume 30, Number 2 of the Harvard Journal of Law & Public Policy – http://www.law.harvard.edu/students/orgs/jlpp/Vol30_No2_KatesMauseronline.pdf

Murder Victims–Circumstances and Weapons Used or Cause of Death (1980-1998) –http://www.allcountries.org/uscensus/333_murder_victims_circumstances_and_weapons_used.html

“Justifiable Homicides” Are on the Rise – http://www.alternet.org/story/107001/%22justifiable_homicides%22_are_on_the_rise%3A_have_self-defense_laws_gone_too_far

US gun sales up after Obama re-election – http://www.telegraph.co.uk/news/worldnews/northamerica/usa/9670585/US-guns-sales-soar-after-Barack-Obamas-re-election.html