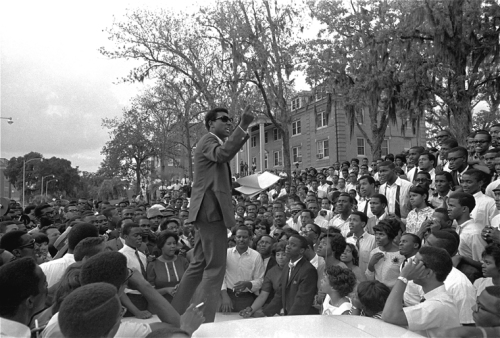 Stokely Carmichael, national head of the Student Nonviolent Coordinating Committee [SNCC] speaks from the hood of an automobile on the campus of Florida A&M University, April 16, 1967, in Tallahassee, Florida.  Several hundred students listened as Carmichael spoke of “Black Power” and the Vietnam war.  (AP Photo/stf)

“In Lowndes County, we developed something called the Lowndes County Freedom Organization. It is a political party. The Alabama law says that if you have a Party you must have an emblem. We chose for the emblem a black panther, a beautiful black animal which symbolizes the strength and dignity of black people…Now there is a Party in Alabama called the Alabama Democratic Party. It is all white. It has as its emblem a white rooster and the words “white supremacy – for the right”. Now the gentlemen of the Press, because they’re advertisers, and because most of them are white, and because they’re produced by that white institution, never called the Lowndes County Freedom Organization by its name, but rather they call it the Black Panther Party. Our question is, Why don’t they call the Alabama Democratic Party the “White Cock Party”? It’s fair to us…” (1966)