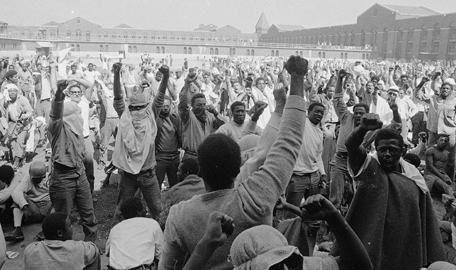 On September 10, 1971, more than 1,000 inmates took over the Attica Correctional Facility, a maximum security prison located in western New York.

The prisoners broke windows and burned beds and furniture after overtaking 32 guards and civilian employees.

It took over 1,500 state troopers and sheriff deputies to regain control.

BlackPast.org –   There were many causes of the riot. Tensions were already high “as the prison was extremely overcrowded and inmates were being denied basic sanitation needs. They were usually limited to one shower a week and one roll of toilet paper per month. Additionally there were allegations of racism by the prison’s all white guards against the 54% black population and a significant Puerto Rican minority.

Using pipes, chains, and baseball bats, the inmates quickly overcame the guards in the area.  Suddenly they were in command of the prison and had taken 40 staff members hostage. Their demands were: federal takeover of the prison, better conditions, amnesty for the crimes committed during the revolt, and the removal of the prison’s superintendent.

The authorities and prisoners remained at a stalemate for four days until New York Governor Nelson Rockefeller approved an operation to reclaim the prison. Tear gas was dropped by helicopter into the prison yard and law enforcement officers opened fire into the smoke. In six minutes more than two thousand rounds had been discharged. The prison was retaken but at the cost of thirty nine inmates and ten guards lives.

The nine member commission put together by Governor Rockefeller to sort out this tragedy had a number of criticisms about the handling of this situation. The media was allowed access and this attention gave the prisoners a national spotlight that they were unwilling to give up. Governor Rockefeller, despite numerous requests from the Corrections Commissioner Russell Oswald to come to the prison, had refused and then ordered the state’s armed forces into action without ever appraising the situation himself.  Also the negotiations were hampered by the fact that they took place with 1,200 rioters looking on.

The assault itself was poorly planned and inmates and hostages alike were wounded and killed as a result. The use of shotguns after the tear gas was dropped in particular was criticized as the potential for unintentional injuries was enormous.  Additionally no adequate medical care was arranged for those injured in the assault and rushing to find help for the wounded put lives needlessly in danger.”

In the end there were conflicting calls for tougher prisons on one side, and for prison reform to correct the abuses that had contributed to the riot on the other. In the immediate aftermath of the riot, the prisoners’ rights movement flourished for a brief bit and a number of reforms were instituted.  But in the years since, politicians have opted to be “tougher on crime by incarcerating many more people, thus 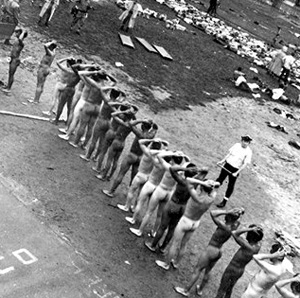 overcrowding many facilities; reducing any service that might be seen as “coddling” prisoners; reducing or eliminating prison education programs” and generally creating a permanent criminal underclass.