“Black churches are very powerful forces in the African American community and always have been. Because religion has been that one place where you have an imagination that no one can control. And so, as long as you know that you are a human being and nobody can take that away from you, then God is that reality in your life that enables you to know that.” 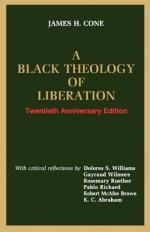 Cone is an advocate of (black) liberation theology grounded in the experience of African Americans. In 1969, his book Black Theology and Black Power provided a new way to articulate the distinctiveness of theology in the black church.

He is currently the Charles Augustus Briggs Distinguished Professor of Systematic Theology at  Union Theological Seminary in New York.

As part of his liberation theological analysis, Cone argues for God’s own identification with “blackness”:

The black theologian must reject any conception of God which stifles black self-determination by picturing God as a God of all peoples. Either God is identified with the oppressed to the point that their experience becomes God’s experience, or God is a God of racism…. The blackness of God means that God has made the oppressed condition God’s own condition. This is the essence of the Biblical revelation. By electing Israelite slaves as the people of God and by becoming the Oppressed One in Jesus Christ, the human race is made to understand that God is known where human beings experience humiliation and suffering…Liberation is not an afterthought, but the very essence of divine activity. (A Black Theology of Liberation, pp. 63-64) 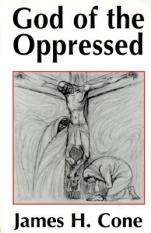 Cone was not entirely focused on ethnicity: “Being black in America has little to do with skin color. Being black means that your heart, your soul, your mind, and your body are where the dispossessed are.” (Black Theology and Black Power, p. 151)

In 1977, Cone wrote, with a still more universal vision:

I think the time has come for black theologians and church people to move beyond a mere reaction to white racism in America and begin to extend our vision of a new socially constructed humanity in the whole inhabited world…For humanity is whole, and cannot be isolated into racial and national groups.

Cone is an ordained minister in the African Methodist Episcopal Church. He is the author of eleven books and over 150 articles and has lectured at more than 1,000 universities and community organizations throughout the United States, Europe, Africa, Asia, Latin America, and the Caribbean.