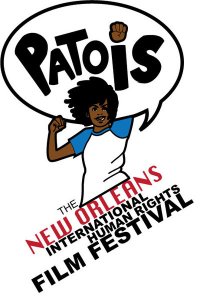 This year, PATOIS will be better than ever. More than 50 films, 8 world premieres, 20 filmmakers presenting their films, food provided by at least six different New Orleans restaurants, workshops, panels, and live performances by local and national musicians at venues around the city, as well as out in the streets!

Complete information about our programming is available online at patoisfilmfest.org, and programs are available at spots all around New Orleans.

We have discounted and free tickets available for youth, and for others who might not otherwise be able to afford tickets. For more information, please write emily@nolahumanrights.org.

SOME OF THIS YEAR’S HIGHLIGHTS:

Friday, March 27
6:00pm Youth Rise Up: Films by students and young filmmakers
8:00pm Obama’s Iraq: New Films and Journalism from Iraq
*Please Note Venue Change* Lazziza – 2106 Chartres Street (at Frenchmen)
Films by New Orleans high school students, work by youth from around the world, and new grassroots media from Iraq. Filmmakers will be presenting their films, and the youth program features a panel of young filmmakers.

Friday, April 3
9:00pm Nerakhoon (The Betrayal)
Zeitgeist Multi–Disciplinary Arts Center, 1618 Oretha Castle Haley Blvd
Academy Award-nominated documentary filmed over 23 years, from Laos to the US. A testament to the resilient bonds of family and an astonishing tale of survival.

Ticket prices, complete descriptions of films and programming, trailers, bios of guest speakers, and more is available online at patoisfilmfest.org. You can also buy a festival pass, for free admission to all films, on our website and in person at all venues.