Putting their careers before our economy

From James, Gabriel, Clarissa, William, Dani and the rest of the ColorOfChange.org team.

The Obama stimulus plan provides desperately needed money to help turn the economy around. But six Republican governors want to block some of that money from reaching their states–they’re trying to score political points instead of letting the money go where it’s needed most. Help us call them out: 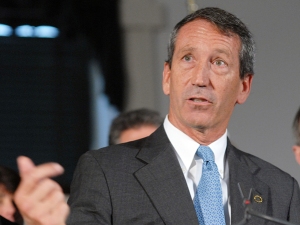 First, they attacked the expansion of unemployment benefits–assistance directed to those hit the hardest by the economy. Now they’re going further, led by Governor Mark Sanford of South Carolina who says he’ll block $700 million for schools and public safety in his state. It could mean up to 7,500 teachers in South Carolina losing their jobs.1

With your help we can hold these governors accountable–but time is running out. The deadline for governors to accept the full range of stimulus funds is rapidly approaching. Can you add your voice? It only takes a second:

It’s incredible. President Obama’s stimulus package provides money for states to help stabilize families and keep the economy moving. Some of that money is to help states extend unemployment benefits for people in dire need of help. There’s also money to prevent schools from facing cuts as states tighten their budgets. But a handful of Republican governors–Bob Riley of Alabama, Mark Sanford of South Carolina, Rick Perry of Texas, Sarah Palin of Alaska, Haley Barbour of Mississippi, and Bobby Jindal of Louisiana–are putting politics over people.2,3

All six governors have threatened to turn down the unemployment expansion funds, and most critics see their actions as partisan grandstanding. Four are 2012 presidential contenders,4 and one is facing a tough primary challenge for reelection.56 They also claim that taking the stimulus money would leave their states in debt when it runs out in three years. But that argument rings hollow–state legislatures could reduce benefits to pre-stimulus levels at that point. They all have a vested interest in seeing Obama fail. They’re attacking the President’s policies to increase their own profile and to cozy up to the most die-hard conservatives.

Now, Gov. Sanford of South Carolina is going further with this political posturing, and there are indications that others may follow.7 Sanford says he wants to use money meant for schools, health care, and public safety to pay down his state’s debt. This would in no way stimulate the economy of South Carolina.

Sanford has said that if he can’t use the money to pay down debt, he’ll reject it. That would seriously harm South Carolina’s economy, affecting everyone in the state–but it would have a disproportionate impact on Black people in the state. Schools in many Black communities in South Carolina already suffer from years of neglect.8 And in every state where GOP governors are threatening to block stimulus funds, Black unemployment is at least twice the rate of White unemployment.9

Tell governors like Sanford to stop putting their ideological and political interests above the good of their citizens and the nation. Demand that they accept all of the stimulus money available to their states. And when you do, please ask your friends and family to do the same.

Help support our work. ColorOfChange.org is powered by YOU–your energy and dollars. We take no money from lobbyists or corporations and our tiny staff ensures your contributions go a long way. You can contribute here:

5. “Recession comes to Texas as Perry faces off with challengers for governor,” Dallas Morning News, 3-10-09
http://tinyurl.com/ca2h9o