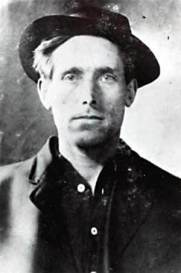 Swedish- American labor activist, songwriter, and member of the Industrial Workers of the World (IWW, also known as the Wobblies). He was unjustly executed for murder after a controversial trial.

Hill rose in the IWW organization and traveled widely, organizing workers under the IWW banner, writing political songs and satirical poems, and making speeches. His songs frequently appropriated familiar melodies from songs of his time. He coined the phrase “pie in the sky”, which appeared in his song “The Preacher and the Slave” ( A parody of the hymm “In the Sweet Bye and Bye”). Other notable songs written by Hill include “The Tramp”, “There is Power in the Union”, “Rebel Girl”, and “Casey Jones:  Union Scab”.

Hill was executed by firing squad on November 19, 1915, and his last word was “Fire!”  Just prior to his execution, he had written to Bill Haywood, an IWW leader, saying, “Goodbye Bill.  I die like a true blue rebel.  Don’t waste any time in mourning. Organize… Could you arrange to have my body hauled to the state line to be buried? I don’t want to be found dead in Utah.”

His will, which was eventually set to music by Ethel Raim, read:

My will is easy to decide

For there is nothing to divide

My kin don’t need to fuss and moan

“Moss does not cling to a rolling stone.”

I would to ashes it reduce

And let the merry breezes blow

My dust to where some flowers grow

Perhaps some fading flower then

Would come to life and bloom again

This is my Last and final Will

Good Luck to All of you

Hill’s body was sent to Chicago, where it was cremated. This was fitting, as he had joked that he would not be caught dead in Utah. His ashes were purportedly sent to every IWW local. In 1988 it was discovered that an envelope had been seized by the United States Postal Service in 1917 because of its “subversive potential”. The envelope, with a photo affixed, captioned, “Joe Hill murdered by the capitalist class,  Nov. 19, 1915,” as well as its contents, was deposited at the National Archives.

The last of Hill’s ashes (but not the envelope that contained them) was turned over to the IWW in 1988.  In These Times ran notice of the ashes and invited readers to suggest what should be done with them. Suggestions varied from enshrining them at the AFL-CIO headquarters in Washington, DC to Abbie Hoffman’s suggestion that they be eaten by today’s “Joe Hills.”  The majority of the ashes were cast to the wind in the US, Canada, Sweden, Australia, and Nicaragua. The ashes sent to Sweden were only partly cast to the wind. The main part was interred in the wall of a union office in Landskrona, a minor city in the south of the country, with a plaque commemorating Hill. That room is now the reading room of the local city library.

One small packet of ashes was scattered at a 1989 unveiling ceremony for a monument to IWW coal miners buried in Lafayette, Colorado.  Six unarmed strikers were machine-gunned by Colorado state police in 1927 in the Columbine Mine Massacre. Until 1989 the graves of five of these men were unmarked. Another famous Wobbly, Carlos Cortez, scattered Joe Hill’s ashes on the graves at the commemoration.

One response to “Joe Hill”